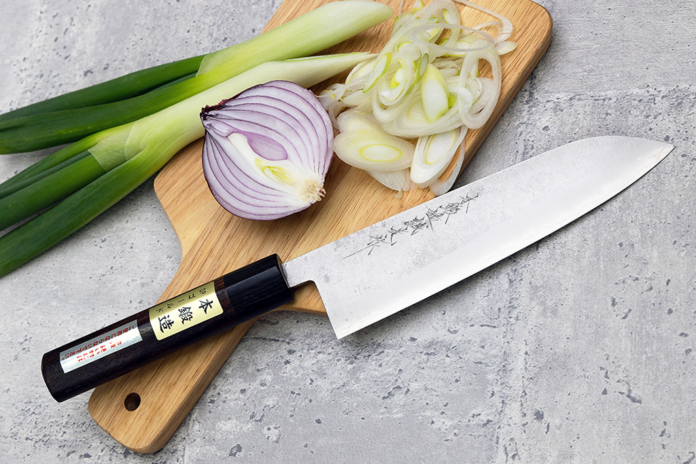 If you’re a fan of Japanese food or just curious about how to prepare it, you’ve probably heard of the Santoku knife. This Japanese-style knife is surprisingly popular in both home and professional kitchens worldwide. The Japanese santoku knife is an all-purpose kitchen knife typically made with a stainless steel blade and has a straight edge with a sheep’s foot end, making it easy to slice, chop, and dice different kinds of food. But what makes the santoku so unique? Continue reading to learn more!

A traditional Japanese santoku knife usually measures about 7 inches long, with a blade around 3 inches long and a thinner spine than Western chef’s knives. That makes it easier to cut paper-thin slices (like for miso soup or sashimi).

Santoku knives can be used for slicing, dicing, and mincing, so they work well when making multiple dishes simultaneously. The rounded tip is great for rocking back and forth when cutting vegetables into bite-sized pieces.

The Japanese Santoku knife has a unique design.

A santoku knife is an Asian chef’s knife, typically between 7 and 9 inches long. If you’re familiar with Western-style chef’s knives, you know they have a slight curve at the blade’s tip to make rocking motions easier. A santoku also has a sharp point for precision cuts, but unlike its Western counterpart, it doesn’t have any curves on the sides of its blade. This makes chopping easier because there are fewer places for food to get stuck in between your ingredients when you chop them up.

Santoku knives are great because they allow you to chop vegetables quickly by rocking from side to side instead of making more precise slices with each downward motion. This helps keep foods from getting stuck between slices which can be frustrating when trying out new recipes or preparing meals fast (but still looking good).

Santoku knives are made from high-carbon steel.

Many Japanese knives are made from high-carbon steel (as opposed to stainless), which is harder than stainless and more fragile. This makes them great for cutting through tough meats and vegetables, but it also means that you have to be careful not to chop too hard or cut anything with an edge on it, as these will chip or dull the blade quickly.

However, a few manufacturers have opted for another option: sandwiching two layers of high-carbon steel together with a layer of softer metal like nickel in between. This combination protects the knife better than if made entirely of one type of metal alone, allowing you much greater freedom in terms of what you can cut without worrying about damaging your knife!

Santoku knives are also great for cutting vegetables and meat but tend to be smaller than other kitchen knives, such as chef’s knives. The primary difference between a chef’s knife and a santoku knife is that the former has one straight edge while the latter has two straight edges—one near its base where it meets up with its handle; another closer up near where it meets up with its tip. This design makes it easy for right-handed and left-handed people to use a Japanese santoku knife.

With its straight edge and a slight curve at the tip, this knife is perfect for slicing, dicing, and mincing meat, fish, or vegetables. It’s also great for chopping herbs since it doesn’t have a pointed tip like other knives. It’s easy to maintain because it doesn’t rust easily (unlike regular steel) and stays sharp longer than most other knives, even though they are sharpened at least once weekly!